Go to Navigation Go to Content
Request A Quote

U Cup seals, as their name implies, have a U-shaped profile, including an outside static sealing lip and an inside dynamic sealing lip. U-Cups, or U-Seals are used for both dynamic and static applications.  The “U” shape energizes the sealing lips as the application pressure increases.  There are a number of lip profiles, with the most popular being a Standard U-Cup, Deep U-Cup or Beveled lip U-Cup (B-Type U-Cup).  The standard U-Cup has the same cross section and height.  The deep U-Cup has a height greater than the cross section.  The Beveled lip, or B-type U-cup has a bevel lip as the name states.  Loaded B-type Symmetrical U-Cups are a very versatile reciprocating seal design for use up to 5000 psi. 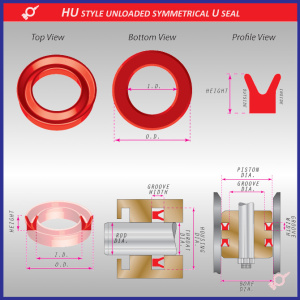 They come in two designs, unloaded or loaded.  Unloaded simply means is does not have an O-Ring inside.  The loaded U-Cup, also known as a Polypak, has an O-Ring or sometimes a quad ring within the seal to act as an expander to provide even better sealing capabilities.  The loaded U-Cup is also referred to as a Polypak.  Because U-Cups do not rely on initial compression to seal, they are excellent in applications that require low breakaway pressure.

U-Cups are used interchangeably for piston or rod sealing.  They are commonly used in linear applications to seal the rod or piston.  The U-Cups are popular due to the small gland space required, which must be a minimum of 110% of the height of the seal used.  The free space is necessary to allow for the thermal expansion of the sealing material and swell due to the effects of the system fluids.