Go to Navigation Go to Content
Request A Quote

What is a mechanical seal? 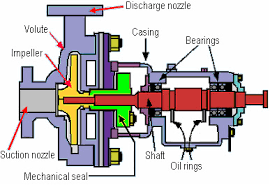 A mechanical seal is simply a method of containing fluid within a vessel (typically pumps, mixers, etc.) where a rotating shaft passes through a stationary housing or occasionally, where the housing rotates around the shaft.

The rotary portion of the seal is sealed onto the shaft usually with an O ring. This sealing point can also be regarded as static as this part of the seal rotates with the shaft.

The mechanical seal itself is the interface between the static and rotary portions of the seal.

One part of the seal, either to static or rotary portion, is always resiliently mounted and spring loaded to accommodate any small shaft deflections, shaft movement due to bearing tolerances and out-of-perpendicular alignment due to manufacturing tolerances.

While two of the sealing points in a seal design are simple static seals, the seal between the rotating and stationary members needs a little more consideration. This primary seal is the basis of all seal design and is essential to its effectiveness.

The primary seal is essentially a spring loaded vertical bearing - consisting of two extremely flat faces, one fixed, one rotating, running against each other.  The seal faces are pushed together using a combination of hydraulic force from the sealed fluid and spring force from the seal design. In this way a seal is formed to prevent process leaking between the rotating (shaft) and stationary areas of the pump.

In most mechanical seals the faces are kept lubricated by maintaining a thin film of fluid between the seal faces.  This film can either come from the process fluid being pumped or from an external source.