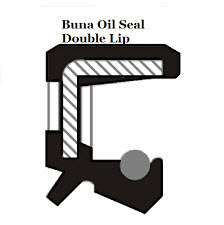 Radial shaft seals are used between rotating and stationary machine components or between two components.  The seal consists of two main parts: a cylindrical outer covering of sheet steel (case) or an elastomer to seal statically against the housing bore.  The second part is the sealing lip, made of an elastomeric or thermos-plastic material that seals dynamically and statically against the shaft.  The lip(s) and shaft form the most important functional area of a radial shaft seal.

Some radial shaft seals have an auxiliary lip that protects the primary sealing lip from dust and other contaminants,  this is the double lip oil seal.  Double lip oil seals feature two lips for better fluid separation or contamination exclusion.

Many oil seals are spring loaded to provide constant, a uniform load of the lip on the shaft for the life of the seal.  The spring load also provides a constant load on both lips of the double lip seal.  The performance of the seal is extremely important where lubricant cleanliness is concerned and also has considerable influence on bearing life.  Contaminants that have passed the auxiliary lip will eventually cause damage to the counterface surface area.